CUDA: What is it?


CUDA is NVIDIA’s parallel computing architecture that enables dramatic increases in computing performance by harnessing the power of the GPU (graphics processing unit) for applications including image and video processing, computational biology and chemistry, fluid dynamics simulation, CT image reconstruction, seismic analysis, ray tracing, and much more.  The current Nvidia (NASDAQ:NVDA) "Fermi" line of GPUs (Graphical Processing Units) provides incredibly powerful parallel computing within reach of most individual users and businesses through rather affordable Nvidia Graphics Cards (and, the upcoming Nvidia "Kepler" GPUs for early 2012 will only be better, faster, and more efficient).

Note: many of these latest CUDA features require a "Fermi"-based GPU (and, using the LLVM-based compiler does).  These cards are worth investing in if you plan to do any CUDA development.  You can get a Fermi-based CUDA-Capable Graphics Card that is quite affordable and power-efficient: I rather like my Quadro 600 card (~$160.00) which uses only 40W for 96 CUDA-processing cores; this card has been very capable for running all my development work on.

The first notable benefit of the LLVM compiler is that Nvidia claims this compiler delivers up to 10% faster performance for many applications (compared to their prior in-house developed C/C++ compiler).

But, what strikes me as the most (potentially) important aspect of this move to LLVM is that we could potentially soon see more (programming) language support for using CUDA outside of just C/C++ and/or additional CPU support.  Nvidia has apparently used the Clang C and C++ compilers within the LLVM framework and has hooked in support for the CUDA parallel development environment.

Although Nvidia's (CUDA C and CUDA C++) compiler modifications are not open-sourced, LLVM will provide a foundation for more easily adding language/processor support.  Given Apple's use of LLVM on ARM (platform), I have to wonder if this is going to be a build-target in the not too distant future.  There are also open-source projects for other programming languages to make use of the LLVM toolchain, so the potential does exist for accessing CUDA / GPU-support from other domain-specific languages eventually (perhaps Java, Python, etc) directly.

Other Major New Features in CUDA Toolkit 4.1
(from Nvidia website, with some added comments and details)


Some of the new capabilities include:

This latest release of the CUDA Toolkit from Nvidia continues to make life easier for any of us that are into parallel-programming with modern GPUs.  Although GPU-computing can be a bit overwhelming and a requires a different mindset than programming desktop applications or designing a website, if you have an application that can benefit from the power of simultaneous operations, this is a technology worth diving into: it is nothing short of a transformational technology.
Posted by Mike Eberhart at 12/18/2011 05:04:00 PM 0 comments

If you are in the market for an affordable 2D and 3D CAD software package for personal, hobby, or professional use, give VariCAD 2012 a look now while VariCAD is offering a 20% off sale through December 28, 2012, for either the Linux or Windows version, and for versions including one-year of upgrades and support.

This super-affordable software (especially compared to the "big name" 3D CAD packages like AutoCad and SolidWorks), is very robust and still simple enough to use that a novice can pick it up in little time (like I did). It can produce some fantastic 3D renderings too (from their samples gallery): 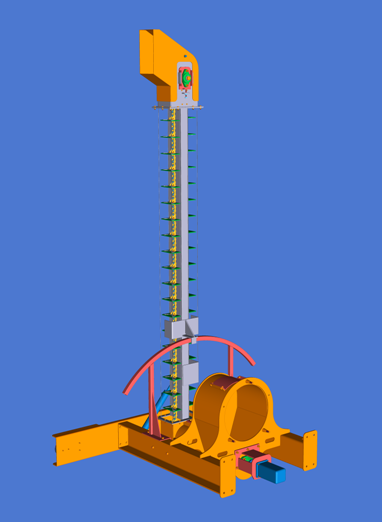 As you can see, it can be quite useful for prototyping mechanical objects and personal inventions visually. I tend to focus on the 3D-aspects of the software (because that is how I think about the objects I am creating), but the 2D CAD features are also plenty impressive also.


My Own VariCAD Use / Experience

I have been much more productive putting my product-ideas down "on the computer" instead of "on paper" (where they tended to be illegible a few weeks later).

My visual-brainstorming has led to some interesting creations (in wood, metal, and carbon-fiber) that I would otherwise not have attempted building -- especially the carbon-fiber inventions, since the material is expensive and I do not want to waste any! The 3D modeling in VariCAD lets me see how parts interact BEFORE I commit to building something (and, I can tweak my design without wasting materials).

In a prior blog about VariCAD, I posted a rendering of some 3D HVAC-ducting layout that I created with VariCAD on Windows -- this design visualization helped me a great deal with what was a complex geothermal heating-system upgrade where new trunk-lines had to be installed in an existing home while working around various obstacles.

Note: you can always try the software (before buying)... just download the trial from VariCAD.com; if you like it, save some money and buy a license while it is on sale!
Posted by Mike Eberhart at 12/14/2011 01:52:00 PM 0 comments